With current events, IAA will over the coming weeks present a series featuring works by local artists, some from The Ipswich Art Society.  With a new artist shown fortnightly.

Charles Nightingale
Another painting from Charles, who was also our first Featured Artist, scroll down for a biography. “This picture, In the Grove at Felixstowe, is a watercolour which unlike most of my oils has no message. The Grove is a wood just north of the urban part of Felixstowe”. 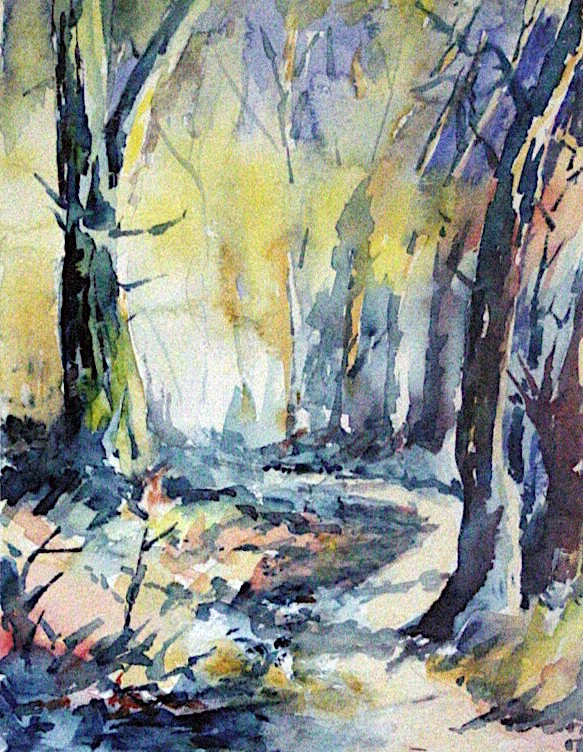 Maureen Jordan FSBA
This is the second piece of work from Maureen Jordan, scroll down to see the first piece shown, ‘POPPY DAZZLER” along with a short biography.
Maureen is now a full time artist painting mainly flowers with pastels, sometimes mixing  them with acrylics and metallic paints. The work here, Nasturtiums in a Bottle, is a partner piece to Poppy Dazzler, they where shown together at a Botanical Artists exhibition. 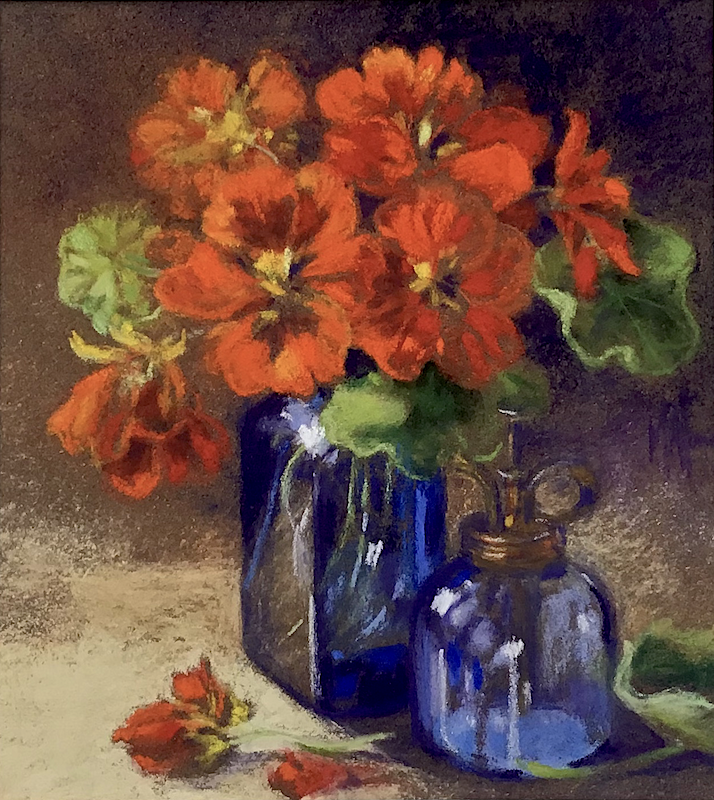 Nasturtiums in a Bottle by Maureen Jordan.  Hard and soft pastel.  35 x 38 cm. 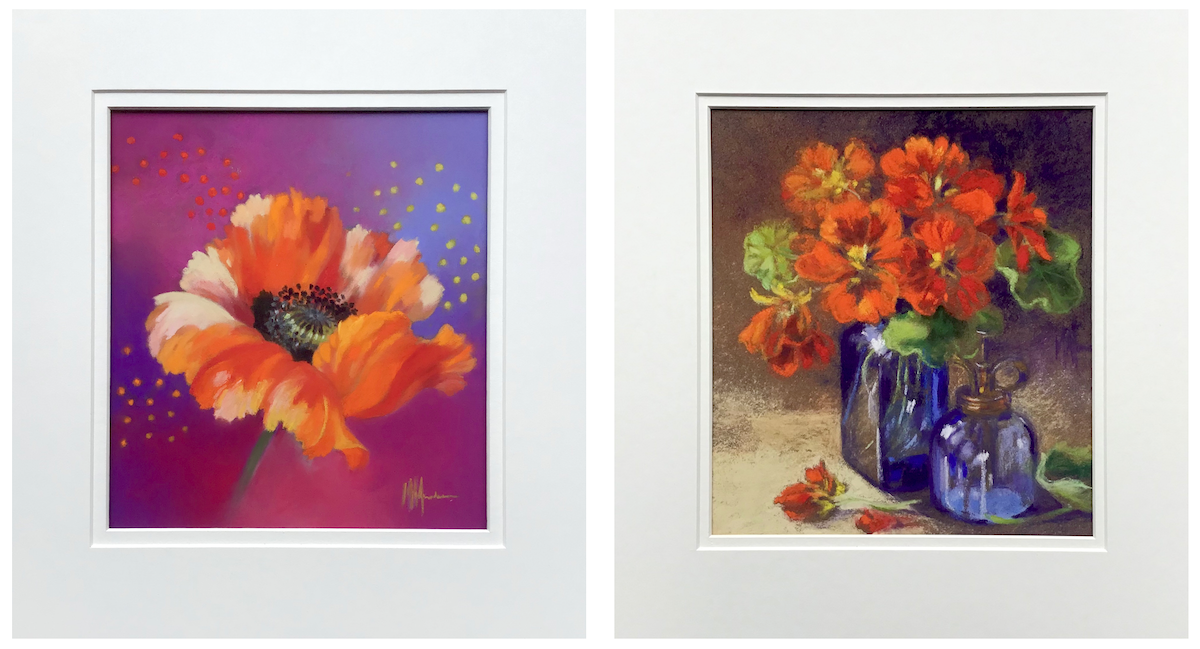 Poppy Dazzler & Nasturtiums in a Bottle by Maureen Jordan

Tessa Mussett
I owe my knowledge of anything connected to Artists, History of Art and the Theatre to my mother’s abundant enthusiasm. Later I went a step further, studying Fine Art at Cheltenham and Canterbury. I use charcoal and in particular chalk/pastel Conte ‘A’ Paris sticks for drawing – a wonderful traditional medium – and in so many colours! My choice of subject matter is easy: Suffolk buildings and landscape. 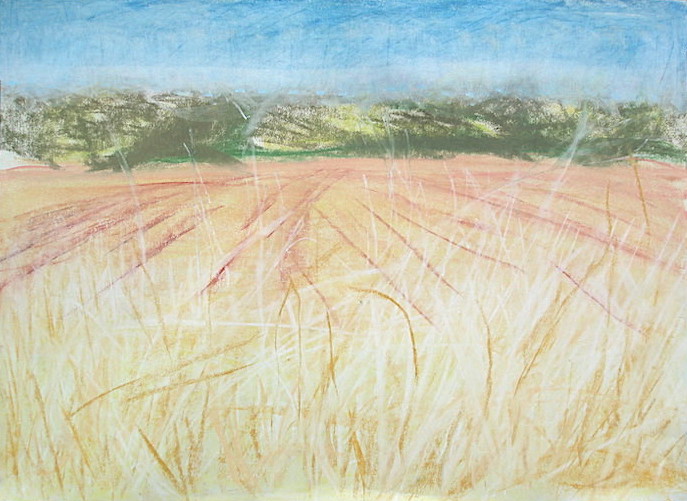 Liz Carter
Liz lives in Suffolk and is a member of the Penisular Art Group (PAG) based at Chelmondiston.

My work predominantly reflects nature through land and seascapes. Inspiration comes when I unexpectedly see something that to me has a ‘wow’ factor and I know that it will be a mosaic design.

While walking in all weathers I note and reflect on the vibrancy of the wide open skies, the effect of trees and formations on the landscape, the ever-changing crops in the fields and the intense beauty and colours of water, both flowing and frozen. I love to explore the visual world through the essence that is mosaic. 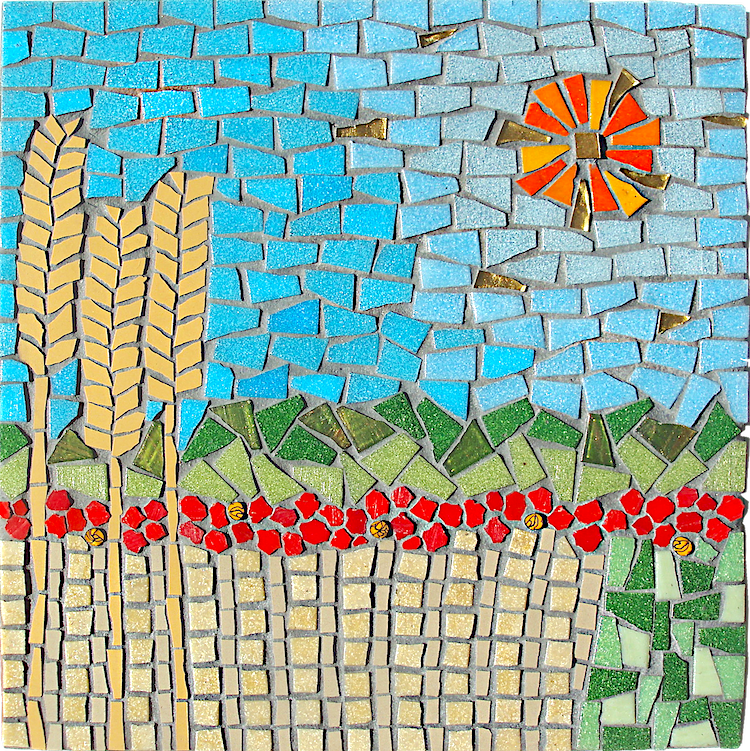 Revd. Susan D. Foster
Revd. Susan D. Foster studied Visual Art at Winchester School of Art.  Following 25 years working with British Forces travelling the world, Susan trained for the Priesthood at the College of the Resurrection alongside the Monks in Mirfield.  It was during her theological studies with The Cambridge Theological Federation that Susan began a fascination with religious icons writing several papers on ‘Pray and Writing Icons’.

The image of the Madonna and Christ is often called ’The Virgin of Tenderness’ or the ‘Virgin of Vladimir’. The Christ Child nestles tenderly close to His mother, He gazes at her and is so closely linked to her that He embraces her fully.

Louise Craigie
After graduating from Manchester with a first class honours degree I always knew I would return to Suffolk, to pursue a career in teaching. That is my current role, an art teacher and Director of the Arts & innovation faculty. However, my passion to teach art lies within my desire to still create my own own and continue in my own creative practice.
In the last five years I have been able to have solo shows, create my own website, be selected for an prestigious exhibition to represent Suffolk Artists and started to sell internationally. 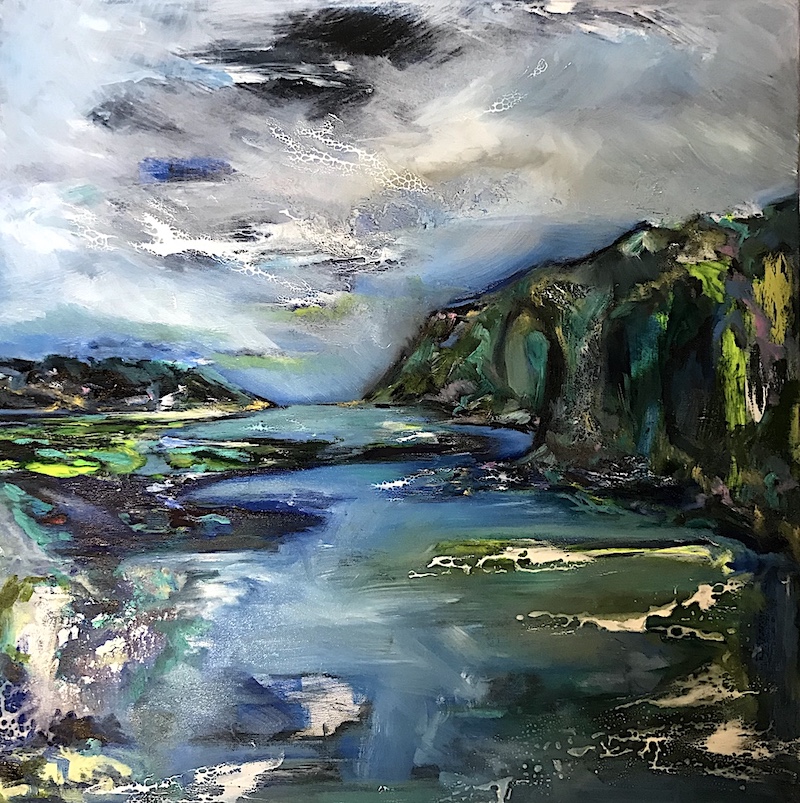 Charles Nightingale
Charles was the first of our Featured Artists, scroll down to see previous works and biography. Charles ia a member, and regular exhibitor, of Ipswich Art Society, and The Society of East Anglian Water-colourists.
Of this piece, Isaac Newton, Charles says;
I find it hard, when looking at famous pictures from XVI Century, to get past those idiotic wigs and gowns. I decided to paint Newton in the clothes that might be worn by a contemporary academic…and got a surprise when I did. He could be about to say “Well we have looked carefully at your application, but…” 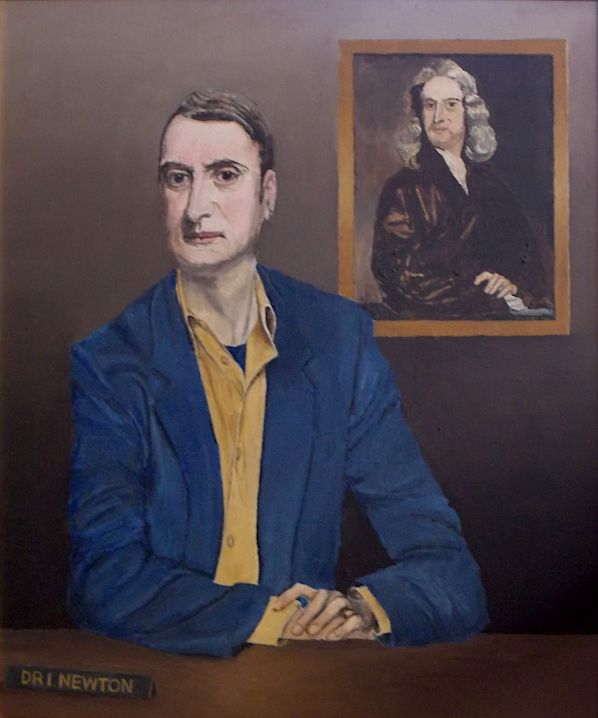 Brenda M. Green FSBA
This is our third piece by Brenda M. Green. Brenda is a Fellow Member of the Society of Botanical Artists. Scroll down the page for a detailed biography along with her first Featured Artist entry Cyclamen Coum. This piece is titled Cherry Plums.
Brenda works on HP (hot press) 300gms (140 lb) Fabriano or Rising Stonehenge paper, using mainly Faber Castell Polychromos and Prismacolor pencils. 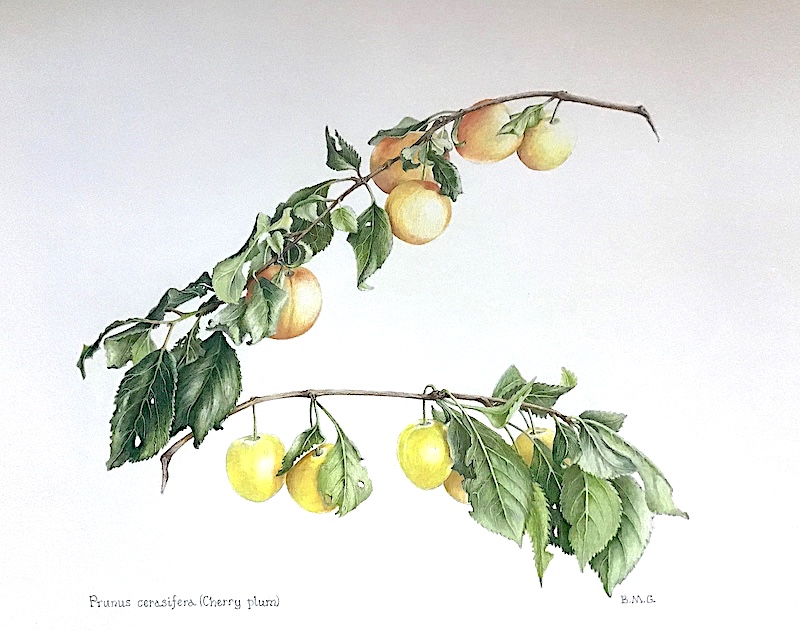 Charles Nightingale
Charles Nightingale was the first of our featured artists, and this submission for the series is entitled
Last Of The Few. Charles says of the piece –
“Inspired by a visit to a much vaunted exhibition of contemporary art some years ago. The gallery was thronging with ordinary members of the public whose expressions varied between boredom, disbelief and rather half-hearted reverence. Amongst the crowd of Londoners on lunchbreak a few people from the world of art could be heard using words like, stunning, controversial, subversive and innovative, but even this group looked faintly uneasy.” 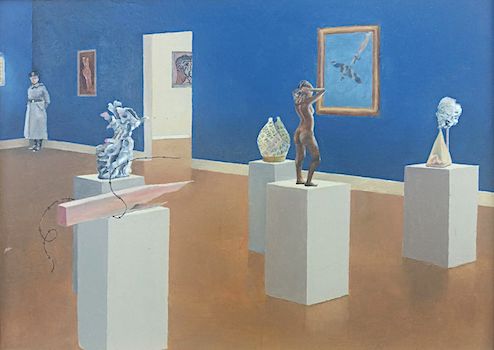 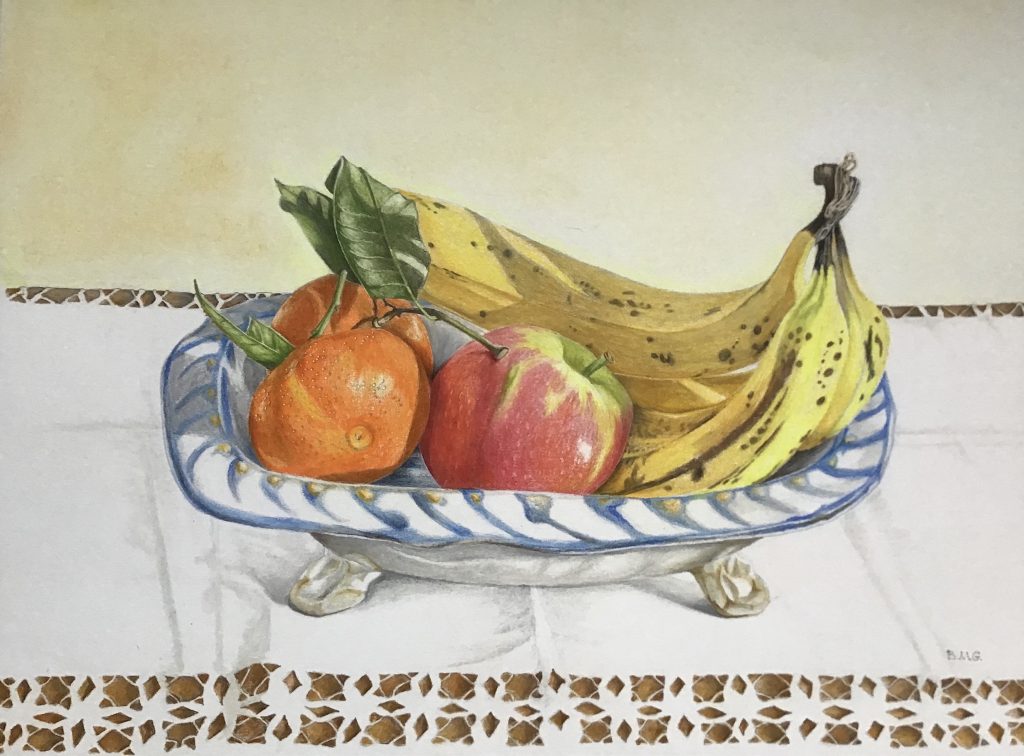 Ania Hobson
Ania Hobson lives in Suffolk. She has exhibited at The Royal Society Of Portrait Painters Annual exhibition 2016 and 2018, Royal Society of British Artists and with the Society of Women Artists at the Mall Galleries in London, 2015. Ania exhibited lats year in Venice with the GAA Foundation which is one of the collateral events of the Venice Biennale 2019 at the European Cultural Centre.

Ania has a degree in fine art, has studied at the Princes Drawing School in London, as well as Portraiture at the Florence Academy of Art, Italy. Her work continues to be exhibited internationally as well as being bought into collections.

The portrait of Professor Chris Green was commissioned by Trianon Music Group to mark its Diamond Jubilee last year.

Charles Nightingale
Charles was the first artist in our series, scroll down for a short biography. He contributes another work here titled Boys Running. Charles says of this piece:

“This picture was done from a sketch which used hundreds of scribbled attempts at capturing the spirit of the moving images of my kids running around on the beach at Biarritz. There ain’t no photo!” 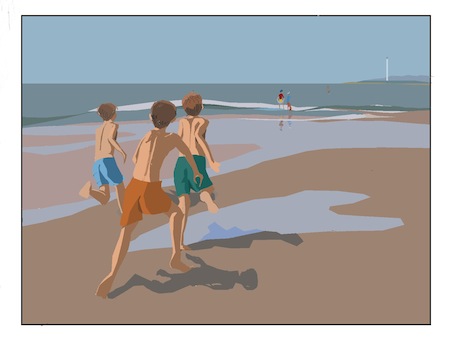 Maureen Jordan FSBA
Maureen was born and grew up in East Yorkshire, studied at Kindston-upon-Hull College of Arts and Crafts and after graduating worked as a freelance Interior and Graphic Designer for many years.  Now a full time artist and a Member of the Society of Botanical Artists, her flower pictures have been reproduced by publishers on cards and prints and are sold worldwide.
Her work is shown in various mixed and shared exhibitions in London, including the Llewellyn Alexander Gallery, a mixed show in Nantucket, USA and a solo show at Jensen Fine Arts, New York.

Maureen has her studio in Ipswich, where she runs Day Workshops.
Visit: www.maureenjordan.com   Contact: maureen.jordan@btinternet.com

“Now as a full time artist I am constantly experimenting with soft pastels – my favourite medium – sometimes mixing vibrant pastel with watercolour, acrylics and metallics creating stunning effects of bold colour and texture.” 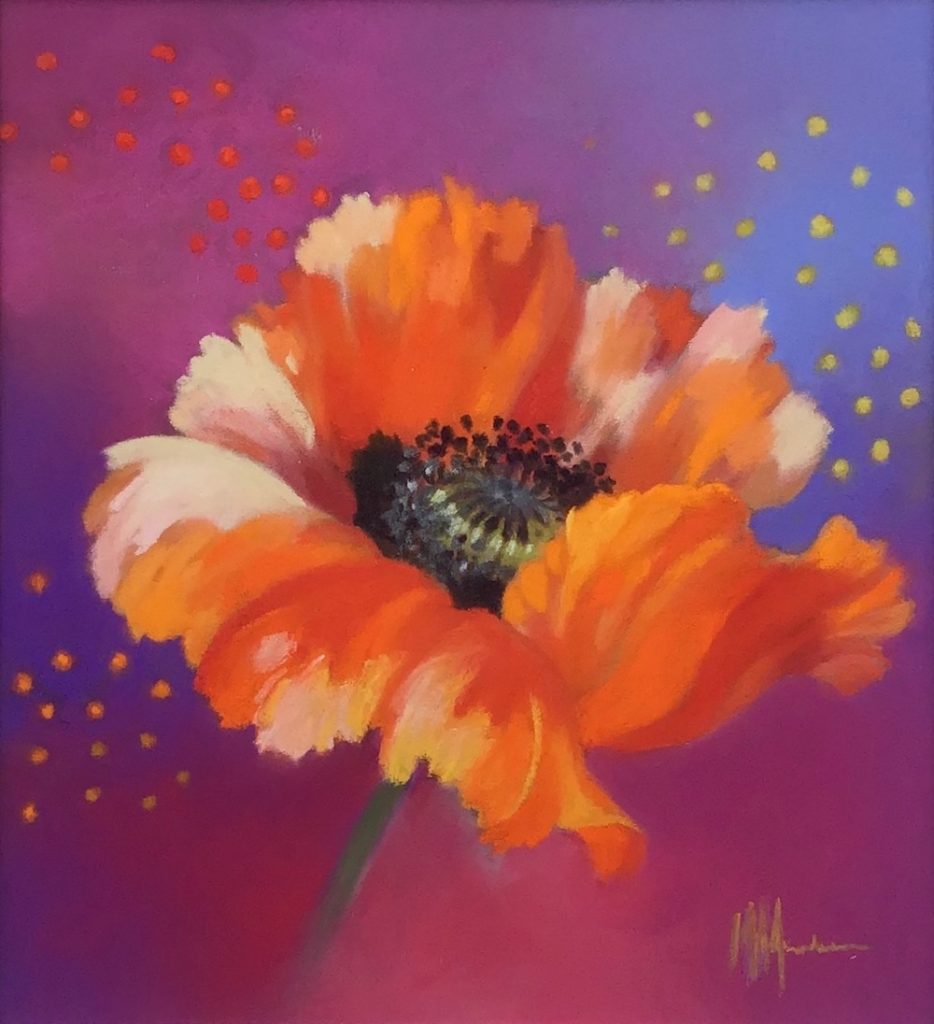 Charles Nightingale
‘Breakpoint’ is our second painting from Charles Nightingale, and the fifth in our featured artists series. Scroll down to view the first painting and a short biography.
Charles also has a website:  www.charleynightingale.com

“This picture appeared in 2007 just before the great financial crash of 2008. It was inspired by the long disintegration of our manufacturing industry, and its replacement by trading in ‘financial products’ or subprime loans as they were called later.”  CN. 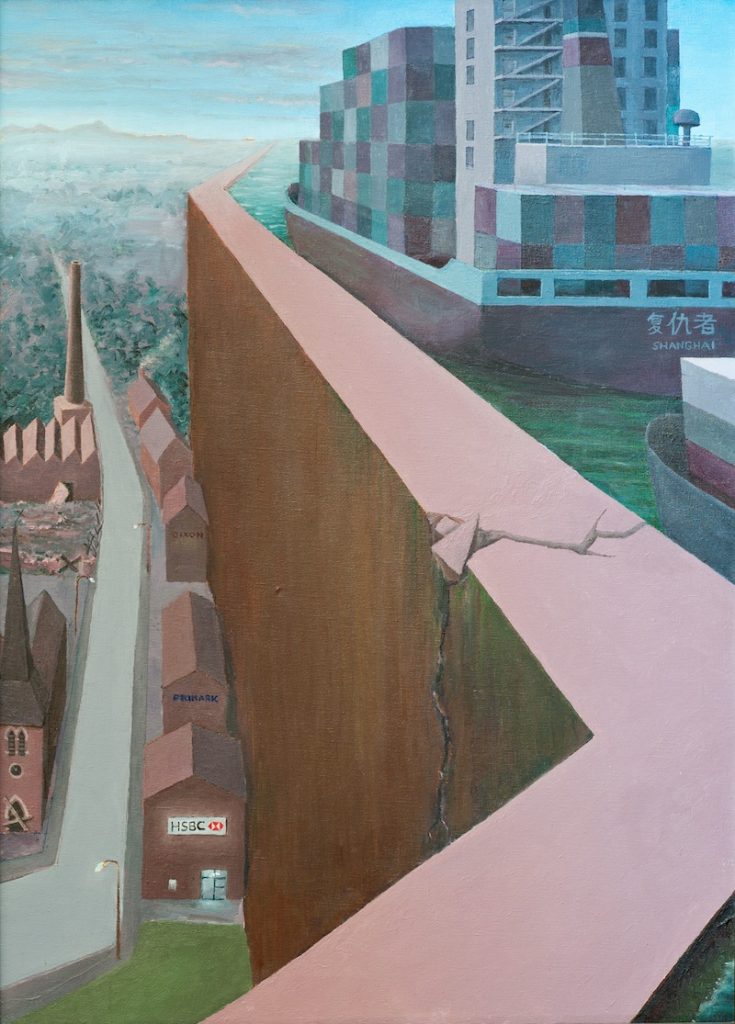 Ferial Rogers
Ferial’s work work is eclectic, especially miniatures (although this is not) and calligraphy.
She is a past member of Suffolk Art Society and a current member of The International Guild of Miniature Artisans – the latter also for miniature crafts.
Ferial adds, “My current obsession is with the needle/fibre crafts, which I love.”

This picture is of St Georges, Venice; which I named eponymously. The medium is acrylic on paper. 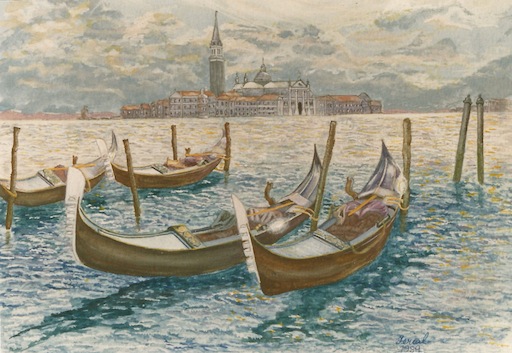 Brenda is a Fellow Member of the Society of Botanic Artists and has been so for several years, exhibiting at their annual Exhibitions at Methodist Central Hall Westminster and lately at The Mall Gallery.  She learned her coloured pencil techniques solely with Ann Swan, who opened a new window to Brenda’s life when Brenda enrolled in her class at Dedham Hall, as Brenda was also a potter and was a primary school teacher for twenty-four years before she met Ann.
Brenda also exhibits at various venues locally, mainly art societies, agricultural shows and fund- raising events. 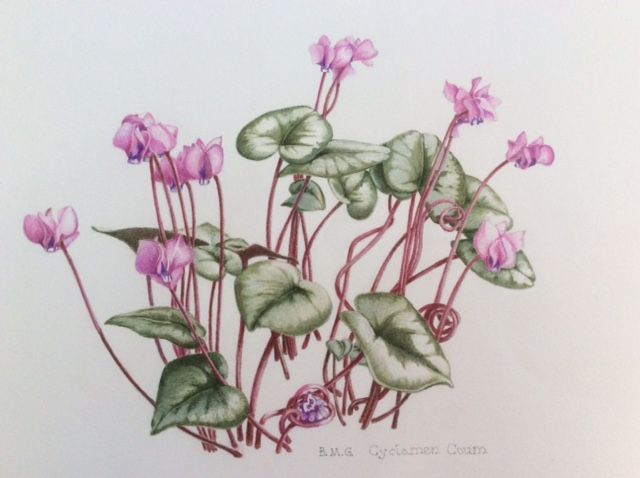 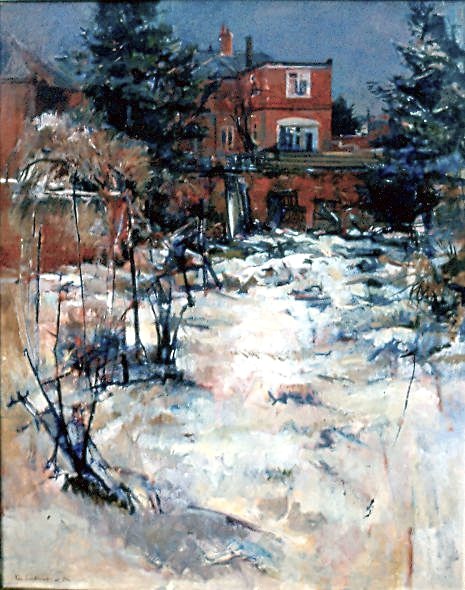 “This was painted over another painting which had to be sacrificed to save time,
but the surface was thus more interesting to paint on”.

Origin of picture:
Passed woman pushing badly disabled teenager in wheelchair up long hill outside Cambridge; stopped, wondering if he should assist, failed on account of fear of being seen as predatory male approaching on deserted road, thought of the lady and the life she must have been leading for many years, and utterly regretted his weakness. Painted picture over next days.

With current events, IAA will over the coming weeks present a series featuring works by local artist… Read More