With current events, over the coming weeks IAA will present a series f… Read More

Suffolk Poetry Society will be sharing work from their membership with us over the coming weeks with a new poem being added at approximately weekly intervals.  www.suffolkpoetrysociety.org 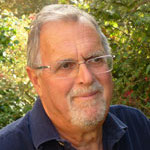 David Healey was born in 1944 and brought up in Cornwall. He qualified as a doctor at Guy’s Hospital and subsequently worked in Papua New Guinea before returning to become a GP in Suffolk. He’s been involved in wildlife conservation and helping to look after his grandson, Archie, who has cerebral palsy. He’s published two collections: of poetry: Slowing the Afternoon Down and Sleeping Among Yaks.
‘A Wild Swan Feed At Welney’ won first prize in the Crabbe Poetry Competition in 2014.

A Wild Swan Feed At Welney

After the kerfuffle of reaching
the viewing chamber, making sure
the children with additional needs
don’t get lost or left behind

the swans fly towards us,
strung out like a wavering horizon,
glide down and carve Vs of curved
spray as they water ski to a stop.

The children laugh and cry, call
across to each other, answer back.
Soon as grain is thrown
from a barrow the swans converge

snatch and swallow what they can,
near enough for us to see
each adult bird has a wedge
of yellow on its bill.

There’s bugling and honking
on the lagoon. Most are Whoopers
though the warden in his spiel
informs us Bewick swans

are seen better from East Hide.
It’s a rumpus when they take off:
smack smack against water
as they struggle to get airborne.

Archie, my grandson, can’t stand
without splints and hand rails
but flapping his arms like wings
he gives me the lift I need just now.

Pools of sunlight and cloud shadow
sweep across The Ouse Washes.
When I hold him at the window
he laughs at where he is in the sky. 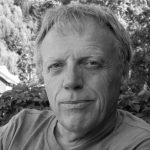 Phil Baker is of mixed European heritage – German, English, French, Polish. He lives in a barn near the Suffolk hamlet of Edwardstone and reads regularly at Arlingtons poetry café in Ipswich. His poetry has been published in anthologies and in the New European.
Mia and the ant – Commended, George Crabbe Poetry Competition 2019
Published in the Suffolk Poetry Society Anthology.

Mia and the ant

As if she’s been charging her batteries for the whole
of her three years
she seizes the day by both shoulders
looks it in the eye and says play!

Runs everywhere. Walking
she’s in danger of leaving herself behind
so she runs to keep up – slowing only when stalking
the moment

Fearless she attacks every climb, every crawl
the playground can offer, with squeals of pure joy
the excitement of putting her all
into meeting each challenge

At times, gaze elsewhere, she’s on auto-pilot
Her feet are left to their own devices
and she staggers, inadvertently almost splicing
her legs, grabs for balance, mutters -That was close

A rope bridge a foot above the ground
is negotiated with the same skill, not looking down
as I imagine her – fifty feet up and inching
not flinching for a moment – just the hint of a frown
above spuming white foam, a rock-strewn torrent
Ropes treacherous, slippery with humidity and slime
somewhere in the wilds of twenty years’ time

Re-crossing a tree trunk
she previously took in her eager stride
she encounters an ant. And stops. Looks.
Rooted to the spot – interrogates it
wordlessly

Or perhaps a more primitive fear
– of an alien creature. With too many legs.
No power of speech, yet the freedom to decide where it wants to go
without any apparent parental control

Earlier she’d asserted with unshakeable certainty
that she hadn’t come out of her Mummy’s tummy
Where from then? She’d laughed as she ran away
calling over her shoulder – I just came from yesterday

Now, faced with tomorrow with six legs, she’s stumped
But only briefly. Shelving the question, to avoid the congestion
on the tree-trunk route, she jumps off
feet first into today 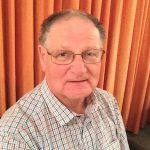 After a working life in local government John attended an evening class on creative writing in 2003. He fell in love with poetry, attended all the adult education classes he could and then obtained a degree from The Norwich Art School. He has published three pamphlets.

Faced with a choice of the ventriloquist or his dummy,
I like the dummy. His eyes are brightly alive whereas
the ventriloquist seems self absorbed. I say seem
because he doesn’t say much. Besides, the dummy has
the gift of the gab and smiles. The ventriloquist cuts
only a flinty grin. It is as if he is still struggling
to remember his lines. Meanwhile the dummy works
the audience, tells jokes and shares anecdotes.
With him we are at ease.
It doesn’t matter that he isn’t politically correct,
often direct, and says things as he finds them.
Sometimes he insults us, calls us names and swears.
We feel we can trust him. And when he speaks to us
in confidence he winks, deliberately lowers his voice
to keep the ventriloquist from hearing anything
he shouldn’t. We can’t help but think if he would drop
the man altogether and stand for Parliament, then
we could vote for him.

Colin lives in a no-man’s land between Dunwich and Walberswick on the Suffolk coast, where he garners most of his poetry ideas from birds and sand and sea and gorsey heath, and his increasingly elusive memories. He has published in various magazines, including The Rialto, South, Magma and Southlight, among others.

absurdly-shirted villains
spill onto pastures and pavements
in threes and fives and nines
like loony toons, or comic hooligoons,
yacking their consonant cackle

pumped-up politicos, platform foppets
in rented tails and tuxedos,
who strut over mud to blot their copy,
beak-tweak their undies in public
and thieve our bauble beliefs
with their crack-pot promises
put paid to you, plaguepies!

With current events, over the coming weeks IAA will present a series featuring works by local artist… Read More